The Foundation's Board of Directors

The Magnus Mukoro Sports Foundation provides New York City children and adults with positive, diverse and secure athletic experiences that promote integrity, confidence, teamwork and self-motivation. Through its work, the Foundation nurtures prosocial values such as kindness, compassion, personal responsibility and respect for others.

The Foundation is named for the late coach, community activist, father and friend, Magnus Mukoro, whose love for soccer, for his community and for life itself continues to inspire the organization.

"Magnus dedicated his life to his community and helping others. His memory and legacy will live on and inspire generations to come.”--NYC Public Advocate, Letitia James

Magnus drowned in a residential swimming pool in 2015, leaving behind a wife, two children, his mother and father, sisters, brothers, nieces, nephews, god-children, co-workers and a community that adored him. His death might have been prevented if Magnus had known how to swim. With this in mind, the Foundation strives to provide a range of athletic activities, including adult swimming classes.

Born in Ghana and raised in Brooklyn, Magnus loved soccer. He co-founded the Young Rock Soccer Academy in 2001, a pre-cursor organization to the Mukoro Foundation, and coached various after-school and summer programs, in order to share his love of “the beautiful game”. Magnus also dedicated his life to public service, working as a paralegal at the Legal Aid Society, and was posthumously awarded The Orison S. Marden Award, in recognition of his outstanding service to the Society, and in honor of his legacy, the DNA Unit created,The Magnus Mukoro Award for Integrity in Forensic Science. In 2015, a plaque was unveiled at Brooklyn Tech Field to commemorate Magnus' enormous influence on his community.

Magnus had a smile that would brighten anyone’s day. It’s the goal of the Foundation that now bears his name to bring his spirit to the communities it serves. 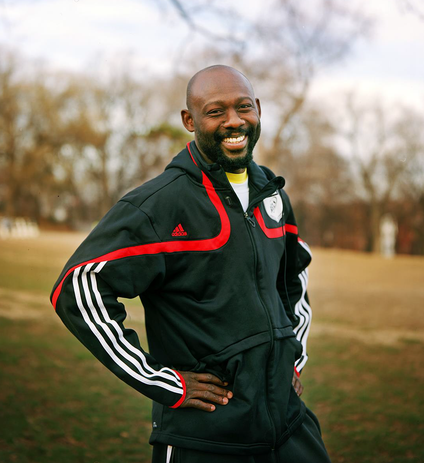 Adam Crawford is a technology manager in New York and a board member of Edge Athletics, a non-profit organization in Poughkeepsie, NY dedicated to helping high school student athletes develop their athletic and academic potential. Adam received a Bachelor of Arts degree from New York University and was a 4-year member of the Men's Basketball team. He has coached basketball on the high school and college level and is
currently a coach in Brooklyn's 78th Precinct Youth Council baseball leagues. Adam lives in Fort Greene with his wife and two children.

Meredith Gray, is Director of The Co-op School, a private pre- and elementary school based in Clinton Hill. Meredith has overseen the Co-op’s growth from thirteen families to over 250  families. Meredith was raised in the sunny south and moved to Brooklyn to attend Pratt Institute  and become a famous artist. A big fan of dancing, cheese and controlled chaos, Meredith — who holds a BFA from Pratt and a MPA from Baruch College — has worked in public and
private schools from Fort Greene to East New York, from Harlem to the Lower East Side.
Paul Holder is currently Senior Vice President of Citi Global Information Security specializing in Mergers, Acquisitions and Divestitures. He has worked for Citigroup for the past 15 years and has spent most of his professional career working in the financial services sector. Paul is dedicated to making a difference in the lives of tomorrow’s leaders through volunteer work, and has mentored high school students, as well as taught Financial Literacy in New York City public schools and youth-oriented organizations such as Legal Outreach. Originally from the island of  Barbados, Paul lives in Brooklyn and is a dedicated father of two, Najah and Jalen.

Sheridan Jack-Browne Mukoro, is the widow of Magnus Mukoro, mother of their two children Josiah and Marley and Founding Member of the Magnus Mukoro Foundation. Sheridan assisted Magnus with the Young Rock Soccer Academy, including handling administrative matters, registration, event planning, ordering medals, supplies, etc. Sheridan graduated with a B.A. from Syracuse University in 1996 and received a J.D. from New York Law School in 2004.  Admitted to the NYS Bar in 2007, she currently works as a Court Attorney with NYC Criminal Court since 2006.  Sheridan is a member of Zeta Phi Beta Sorority, Inc.

John Philp is a writer, filmmaker and advocate. He is the Dads Chapter leader for Moms Demand Action, a grassroots volunteer group dedicated to reducing gun violence. John has also served as the board president of the Co-op School in Brooklyn and is currently a board member of After3, an afterschool provider base don the Lower East Side. John is the founder of Bad Dog Tales, a full-service production company that has produced video for advocacy organizations such as the Neighborhood Defender Service of Harlem and the Pinelands Preservation Alliance.

Michael Randazzo is an Arts administrator, community organizer and educator who currently directs community projects for LIU Brooklyn. While working for contemporary art collector Wynn Kramarsky (1991 to 2012), Michael was involved in a variety of art-related projects, including AboutDrawing.org, a comprehensive exploration of the country’s leading contemporary drawing collectors. Michael has also organized conferences, special projects and sporting events, including BLUR_O2, the Future of War with the Lower Manhattan Cultural Council and The Brooklyn Bridge Cup for Kids soccer carnival. He is also a regular commentator on local Brooklyn sports and arts for Brooklyn Heights Blog, Fort Greene Focus, Fort Green Patch and The Brooklyn Paper. Michael resides in Brooklyn with his wife and two children.
Gilbert Williams, an entrepreneur, engineer, mentor and coach, has been a volunteer coach for over 12 years, including a with Young Rock Soccer Academy, the precursor organization to the Mukoro Foundation. Gilbert manages and leads a group of engineers and project managers at his firm Carifuna Inc., which delivers intelligent and energy efficient ITC solution throughout the US, Caribbean and India. A graduate of St. Francis College, Brooklyn, Gilbert was a member of the Terrier men’s soccer teams that captured back-to-back Northeast Conference titles (1995-96). Gilbert and his son live in Prospect Heights.
View on Mobile